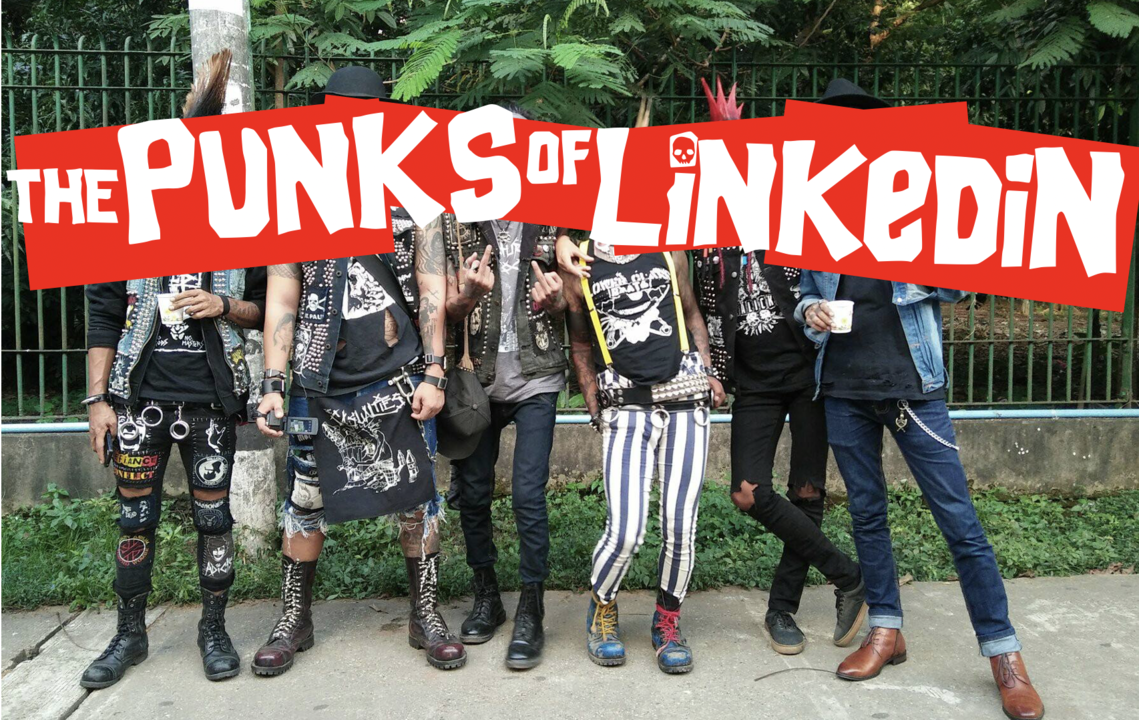 You have probably seen them here before: The Investment Punks, HR Punks or Immo Punks. Sometimes in groups, sometimes alone. Middle-aged men in Slipknot shirts and leather jackets or optionally with the logo of the respective punk gang on their hoodies. They pose with a french fry fork in their hand and a snappy slogan from the business world. Or every now and then something quite subversive like “F*CK WORK/LIFE BALANCE!” or something like that.

I watch with a certain fascination and disgust every time one of these guys pogo dances into my timeline. But somehow the business punks got me thinking today: How do our musical socialization, youth cultures and scenes actually affect our careers? How we work? How we recruit? How we build a business?

I grew up in a small town. We had two small cinemas, forest festivals, soccer and tennis clubs. It quickly became clear that there would be no skate park here. Petitions and press articles didn’t change the town’s mind either. Well, then we’ll just collect wood and bulky waste, teach ourselves manual skills and welding, and build one ourselves. From then on, it basically went on like this: Nobody wants to let our Schraddel-Krach band play in the community center? Then we build our own stage in the garden. Open air is cooler anyway! And when we later wanted to book touring bands at the local jazz club, we were head-shakingly rejected. A short time later there was the first subculture club in town – our rehearsal room.

One or two concerts a year quickly turned into two concerts a month. Where to accommodate a 10-piece band, how to actually cook vegan (hey, it was the early 2000s!), who makes flyers and wouldn’t it be super cool to have an indie disco afterwards?

Frank and I are often asked how we do it all at Fox & Sheep. To outsiders, it seems a bit crazy – small team, lots of output. “Apps, books, radio plays, TV series… why do you do it all yourselves?

Now that I think about it, it’s probably really mostly the do-it-yourself-or-die attitude we’ve inherited from the past.

A little anecdote: When we moved into the new office, the question was not where to buy a new meeting table, but which of us would build it.

That’s probably where the skepticism toward companies comes from. Or the almost childish defiance from which projects in our case sometimes arise. We might have long and exhausting meetings with TV people (obviously the equivalent of the evil major label) or we just figure out how to do it ourselves.

Most of the time, we decide on the latter. Shorter decision-making processes, fewer compromises, artistic freedom and intellectual property rights that I’m still just as reluctant to give up as I was when it was all about the music.

Somewhere in between – between punk rock shows and bottles of Spezi – lies the anchor point of Frank and my, very congruent, compass of values. Which I’m really totally happy about. One of the things that applies to both of us, then as now, is that certain companies and media houses simply don’t work. There’s not much discussion about that either.

How often have I read in recent weeks on the subject of the sale of Ankerkraut to Nestle: “What are you so upset about? That’s exactly what it’s all about. Founding, building and selling as expensively as possible. Everything done right!!!”. Yeah, sure, that’s one way to look at it…. We understand “everything done right” to mean something completely different. Frank and I took over Fox & Sheep to create a place where our employees and we feel comfortable, where we can let off steam creatively and where we have the opportunity to create things that make us and other people – especially children – happy. Basically, it’s like when we used to do rehearsal concerts. We have nowhere to go, so we go to the punk rock show. (Actually sounds much more like hippie than punk).

If it weren’t for the investment punk, I probably wouldn’t have even thought about it. So what are my takeaways from this train ride philosophy?

What is it like for you? What influenced you in your career – the economics studies, the hip hop jams or both? I’m really interested.

So, now I have to go to print PRODUCT PUNK shirts. Of course potato print. If you are interested you can order them on my MySpace page. Oi!

By continuing to use the site, you agree to the use of cookies. more information